I thought I’d write a quick post about this, because it seems that it’s not always a well known concept.  It’s the basic idea that your sex life seems to have inertia.  For those of you with Physics backgrounds, we could say it follow Newton’s

An object at rest stays at rest and an object in motion stays in motion with the same speed and in the same direction unless acted upon by an unbalanced force.

So, what does this have to do with marriage and/or sex?

Imagine your married sex life as an object.  It has mass, and it has a velocity.  For some marriages, that velocity might be quite fast, moving along at a decent pace.  For other marriages, that velocity might be zero, meaning it’s not moving at all.  These are two separate cases, but they react the same way.  In short, the Law of Inertia says that objects like to stay in the same state they are in.  If they’re moving, they like to keep moving.  If they’re “at rest”, or not moving, they like to stay “at rest”.  In short, objects seem to be comfortable with the status quo.  It takes a lot of energy (read: effort) to change the state.

So, for those marriages which are moving along at a good pace, this is good news.  It means it should take relatively little energy (effort) to continue to have the marriage moving in the same direction, at the same speed.  Now, Newton’s First Law states it should need no energy, but it is assuming a zero friction environment.  But, our marriages aren’t zero friction environments.  Any time you put two people in a house, you’re going to have friction.  And the more friction you have, the more the object will slow down.  That’s why it’s so important to learn how to resolve conflict effectively, to learn how to communicate, so that conflict doesn’t turn into friction.  Because the more friction you have, the more effort is needed to keep your marriage moving forward.

If you’re having trouble keeping friction down in your marriage, check out Anonymous Marriage Coaching to get the skills you need to resolve conflict more effectively.

Because if you have friction, and you don’t put the effort in, eventually you will slow down, if not stop, and then I see questions like this in my inbox:

Not really a topic and probably has been well researched but our kid is 19 months old. When it came time to treats blush our sex life it just didn’t happen as soon as I’d like and still hasn’t really recovered fully. I can unplug from parenting long enough to have sex. My wife not so much. I honestly think it just terrified her for 12 -14 months after his birth. Seems like long droughts create more drought and if we have sex a few times it will continue for a while. If I see the trend and turning toward a drought and try correct it, it usually fails and thirst I will go. Ok I’m off my box now [sic]

The worst is when sex stops all together for extended periods.  It becomes incredibly difficult to get it going again.  And that’s what Newton’s First Law tells us as well, that an object at rest likes to stay at rest.  A marriage without sex will need a lot of effort to get started again.

So, what am I saying?  If you see your marriage starting to “slow down”.  Please, act quickly, put in the small amount of effort it will need to get back up to speed.  If you let it slow down too much, or stop all together, you’re going to need an exponential amount of effort to get it going again.  If you recognize it early enough and need help, reach out to someone, a mature couple, pastor, elders, or if you’re too embarrassed, that’s why I created my anonymous marriage coaching practice.  Even if it stops, I’m willing to try and help, but know that your chances of success diminish greatly, because often people find the amount of effort involved just too much to bear.  I’ve had too many spouses say “I agree, what you say would work…but it’s too hard…I’m just going to file for divorce.”  I hate hearing that, because I know the pain it will cause them for years, if not decades to come.

So, please, learn to deal with friction, learn to assess your own marriage and look out for things slowing down.  Not just sex, but communication, prayer, time together, laughter, all aspects.  Get in front of issues, don’t wait for them to blow up and slow you down; and do whatever you can to keep it from stopping all together.

Lastly, a not to those who are going at a good pace, but want to improve.  The one downside to Newton’s Law is that accelerating also takes a lot of energy.  To improve the marriage beyond a comfortable, stable position can take a lot of effort.  Often marriages plateau and have trouble accelerating beyond a certain point.  These are the marriages I really like to work with as a marriage coach.  They’re stable, they both want to get better, they just need someone to help get them to the next level.  To give new perspectives or tips, to teach some new skills, or just to help clarify their vision for the marriage, set some goals and hold them accountable to attaining them.  These marriages reach a level that few get to experience and often take years off the learning experience, just by having someone in their corner cheering them on, setting them up to win.

When’s the last time you thought about how your marriage is doing?  Are you accelerating, slowing down, or maybe you’ve stopped all together.  Either way, figure out what effort you need to improve your marriage and make a decision to put that effort in. 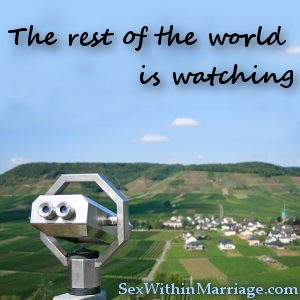 <
The rest of the world is watching

Is your sex life getting routine?

Looking for something to help in the bedroom? From toys to furniture, Married Dance has it all, in a friendly Christian environment. Don't know what to buy?  Check out our introduction to sex toys post for some ideas.  Plus, use coupon code UNCOVERINGINTIMACY for a 10% savings!

Looking for something to help in the bedroom? From toys to furniture, Married Dance has it all, in a friendly Christian environment. Don’t know what to buy?  Check out our introduction to sex toys post for some ideas.  Plus, use coupon code uncoveringintimacy for a 10% savings!

Want to be an Affiliate?

Interested in being an affiliate of our site and earning a commission on our products? Click here for more information.